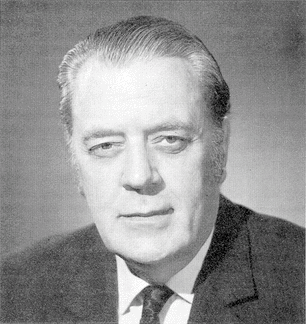 We have Maurice Kendall to thank for this measure, and we have ourselves to blame for using it the way we did.

Still, its modern use is rare and may owe as a legacy to EUGene. Häge (2011) says you shouldn’t use it. Signorino and Ritter (1999) say you shouldn’t use it. But, how might you calculate it? Häge doesn’t include Tau-b in his battery of dyadic foreign policy similarity measures, and with good reason. {peacesciencer} currently doesn’t include support for it, but the thought occurred a future update may want to give this a shot. It required me learning a little bit more about how this measure was calculated/used in quantitative peace science articles. What follows is how I understand this measure to be used in quantitative peace science, with a focus on the Correlates of War alliance data.

I can always see this formula, and yet formulas do little to get me to learn something. Indeed, I think that sentiment was shared broadly in political science in the 1990s and early 2000s, so articles on the topic typically offered some toy examples to illustrate what the underlying data might look like to inform these calculations. Consider this reproduction of Table 6 from Signorino and Ritter (1999), which is a comparison of alliance similarity (more on this particular coding later) between Germany and Russia in 1914.

This results in a contingency table, also included in Signorino and Ritter’s (1999) Table 6, in which Germany and Russia share 13 0s (i.e. no alliance contracts for either side). Three German 3s (Germany, Austria-Hungary, and Romania) are all 0s for Russia. One German 3 is a 1 for Russia (Italy). Two Russian 3s are 0s for Germany (Russia, France). From this, Signorino and Ritter calculate a Tau-b for these two in 1914 to be ~.03.

This is when it finally dawned on me that this is all in base R. It’s in the cor() function with an argument I always pass over for Pearson’s r. It’s method = "kendall". Observe.

Well, that’s easy. I’ve could been doing this stuff the whole time in grad school.

Once you see this for what it is, it doesn’t take too much effort to calculate all this in R. First, here are the packages we’ll need.

Measures of dyadic foreign policy similarity typically come in two flavors: one uses UN voting data, which are obviously limited to observations after World War II. The other uses the Correlates of War alliance data, which is not as current (most recent year is 2012) but has coverage to 1816. We’re going to use the latter. This is in {peacesciencer} as cow_alliance.

What follows is a gigantic caveat since I’ve always hated this train of thought when I was first reading about it in graduate school, even if it never occurred to me how to operationalize Tau-b with the data. Calculating Tau-b like this builds in an assumption that you can construct an ordinal measure of an alliance commitment. The basic train of thought is defense > (neutrality AND/OR non-aggression) > entente > no alliance at all. In their article, Signorino and Ritter (1999) go to great lengths to acknowledge why this is problematic but you should do it anyway. Häge offers the more reasonable take that you should not at all do this and instead use one of his binary measures since you should not think of alliance pledges as ordinal in any way in this typology. {peacesciencer} basically follows Häge’s recommendation and encourages sensible defaults, even if less sensible defaults are available in the data Häge calculated. No matter, we’ll follow what Tau-b calculations were doing at this time and construct an ordinal measure of alliance commitments in the alliance data and grab just what we want.

Next, we’ll create a full data set of directed dyad-years from 1816 to 2012 using create_dyadyears() in {peacesciencer}.

Now, we need to draw the rest of the f*cking owl. We’re going to do this in parallel too, using half of our available cores with some assistance from the {foreach} package. For funsies, we’ll use {tictoc} to time this procedure. First, let’s set up {foreach} to do what we want.

Now, it’s owl-drawing time. The following code will create the data we want. I’ll annotate the code with comments to clarify what’s happening.

This returned a list of data frames, for each year, of directed dyad-year Tau-bs. All that’s left now is to bind them together into one data frame and remove those same-state dyads that we otherwise needed for the calculation. What emerges is a full directed dyad-year calculation of Tau-b correlation coefficients based on alliance commitments from 1816 to 2012.

Here, for example, would be the United States and United Kingdom across time. 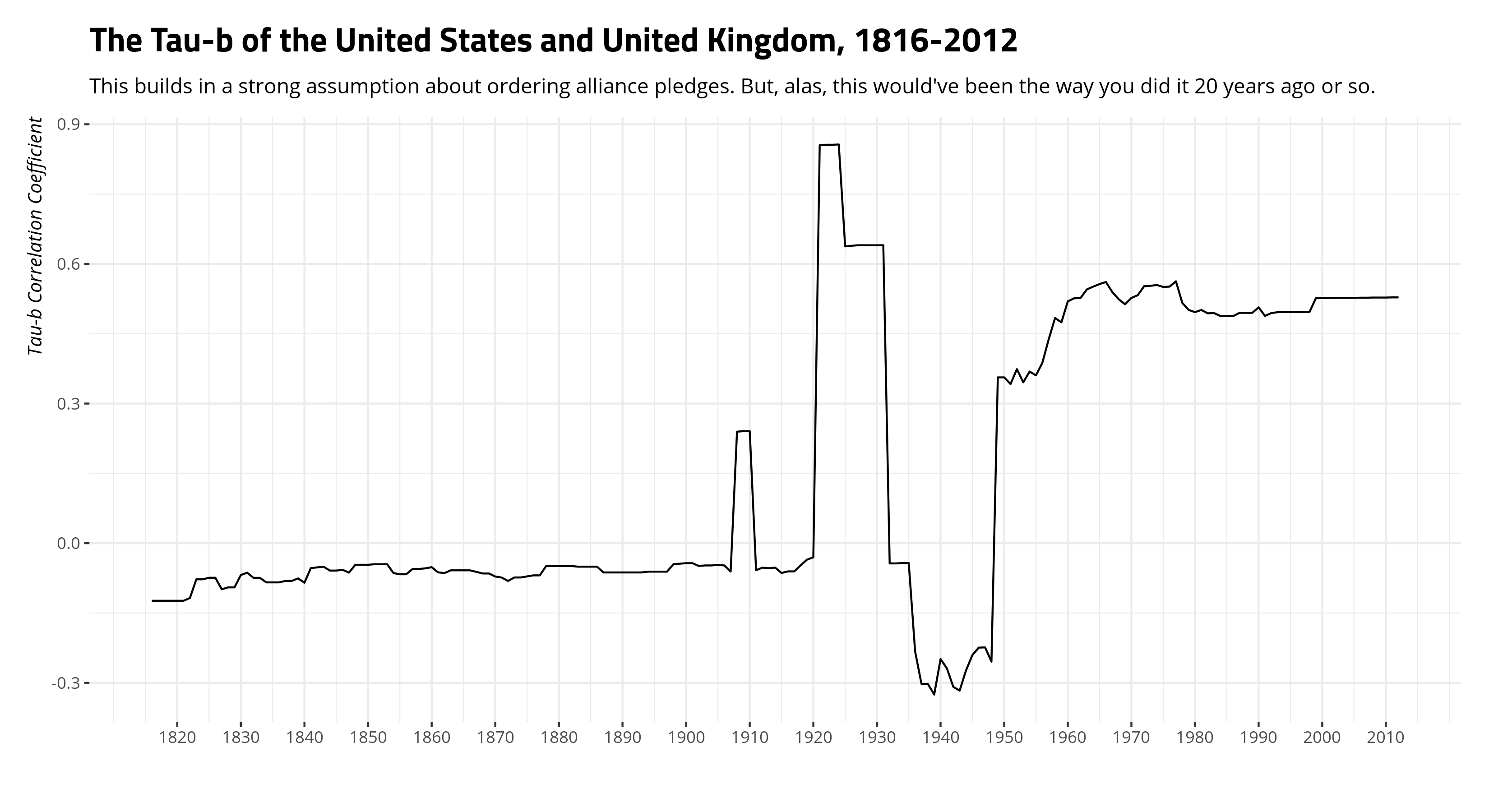 And here would be the United Kingdom and Germany from 1816 to 1945, an effective reproduction of what Signorino and Ritter (1999) report in Figure 1 (albeit with newer data). 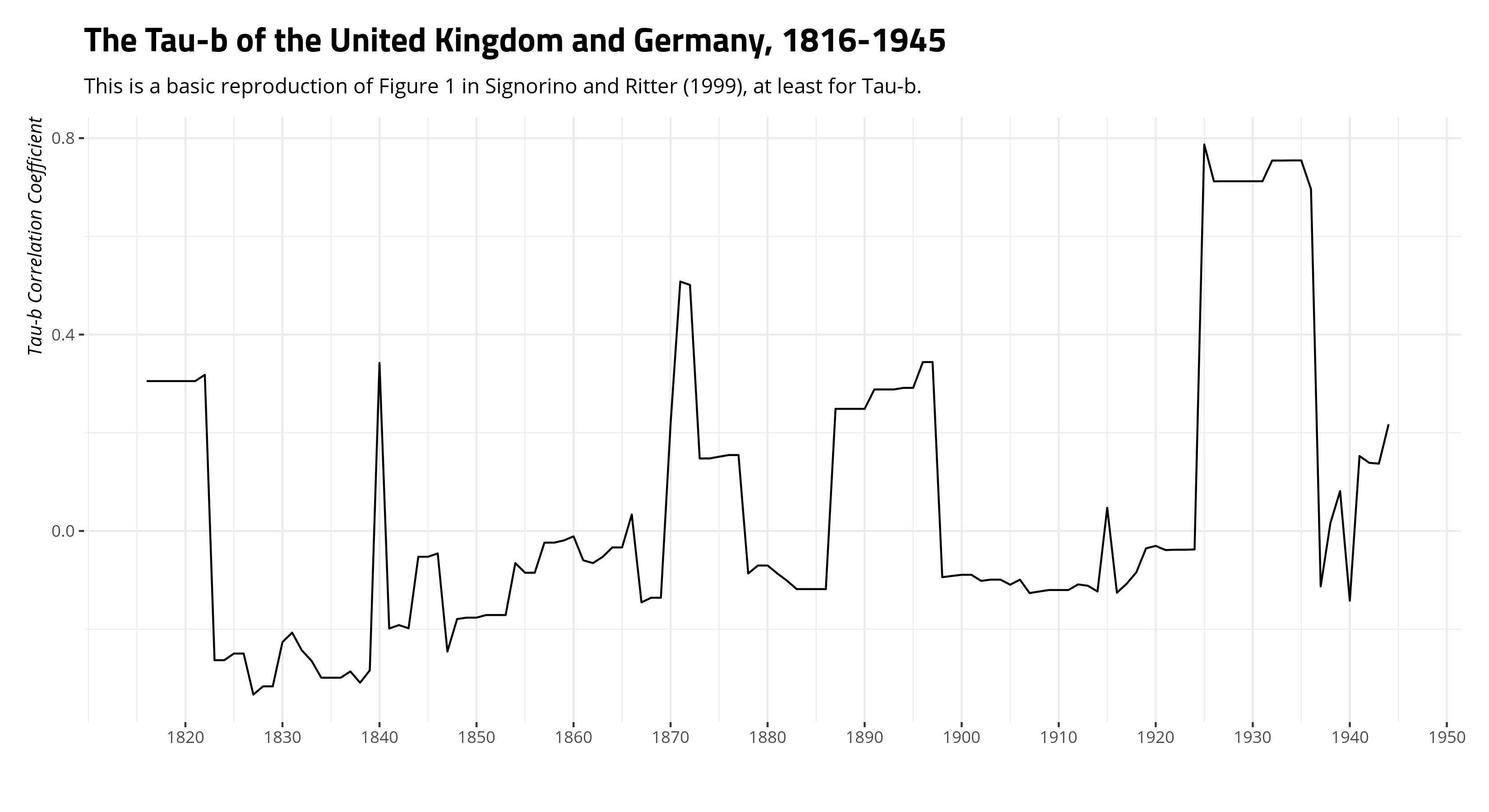 I show how to do this, with a caveat that you should not do this. Tau-b is useful for a lot of things, but not measuring foreign policy similarity by reference to shared alliance portfolios. Toward that end, Signorino and Ritter (1999) are right. Their S doesn’t necessarily capture the concept of dyadic foreign policy similarity either for the reasons that Häge (2011) mentions. His recommendation is Cohen’s (1960) kappa is the best measure for this task, using the binary alliance data.

No matter, here’s how you can do this if, for some reason, you chose to do this.