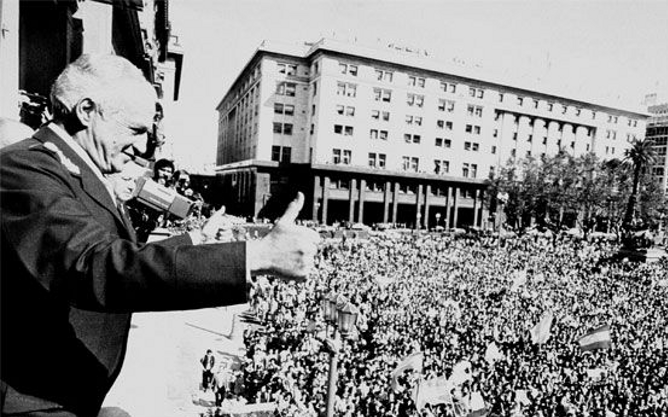 Leopoldo Galtieri, who had just ordered the occupation of the Falkland Islands, greets a jubilant Argentine crowd in the Plaza de Mayo.

Multiple studies in international relations have argued that the division of territory between states is a root cause of war in the international system. This is often understood as a function of the unique importance of territory at the level of the individual citizen, because the territory itself directly affects an individual’s well-being on multiple dimensions. As such, disputes over territory should also have consequences for an individual’s overall subjective appraisal of their well-being. This article argues that disputes over the allocation of territory between states do affect an individual’s subjective well-being, but not uniformly. Citizens in states routinely targeted by a territorial threat from a revisionist neighbor are generally unhappy. However, citizens in states that initiate territorial disputes are happier as a result of the aggressive foreign policy of the state leader to secure the coveted territorial good. This is first demonstrated using mixed effects modeling on data drawn from the World Values Survey and Correlates of War-Militarized Interstate Dispute data set. In addition, this article provides an illustration of variations in territorial threat and subjective well-being using the case of Nigeria, finding that Nigerians were happier when their state was initiating territorial threat against its neighbors and less happy during a period when Nigeria itself was the target of territorial threat. The analyses provided advance the territorial conflict research program by measuring the individual-level effects of territorial disputes. In addition, the findings add to a growing scholarship on the political determinants of an individual quality of life, sometimes considered the “ultimate dependent variable” in social science.