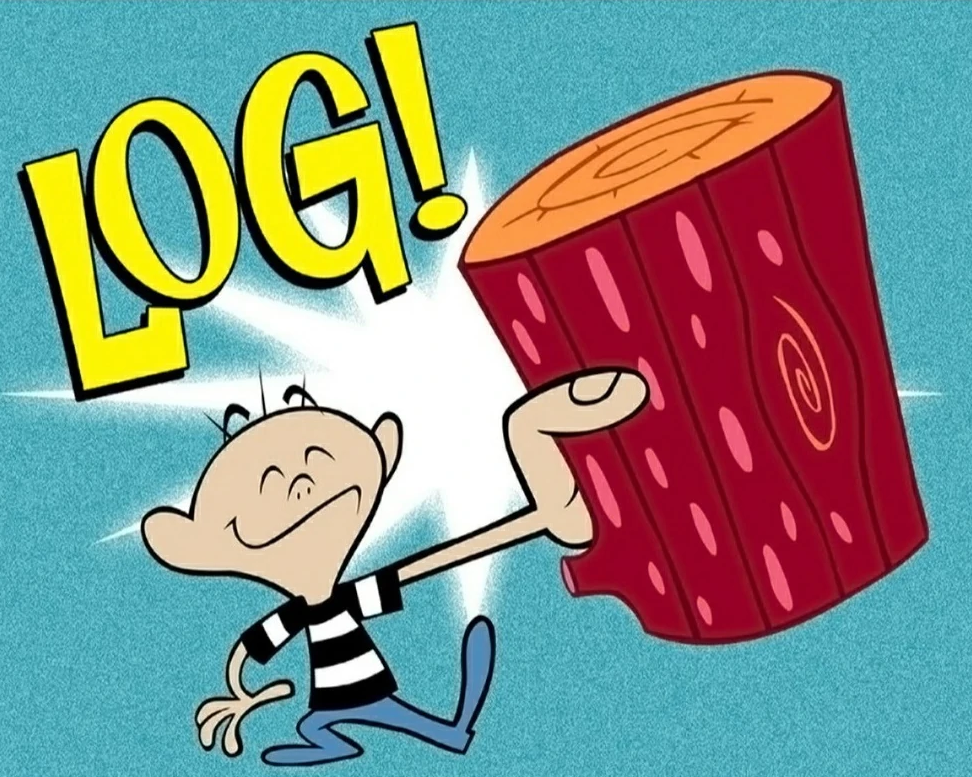 It's better than bad; it's good.

First, here are the R packages I’ll be using in this post.

Here’s a table of contents.

An Aside on Logarithms (and Exponents), and Some Basic Rules

I want to start with a discussion of basic rules of (natural) logarithms and their exponents. The logarithm of a number \(x\) to base \(b\) is the exponent to which \(b\) must be raised to make \(x\). This is a bit easier to see when the base is 10, which is common in a lot of scientific and engineering examples (like the Richter scale). \(10^2\) (or 10 raised to the power of 2) is 100. That means the logarithm of base 10 of 100 is 2, which effectively inverts or “undoes” the exponent.

Statisticians instead prefer a logarithm of base \(e\) (i.e. Leonhard Euler’s constant, or about 2.718) because the derivative of this so-called “natural” log of \(x\) is a simple \(1/x\). Much of the same rules apply, even if the derivative of the log of base 10 is different. However, it’s why statisticians mean “log of base \(e\)” when they say “log” or “natural log.”

I’ll admit that it’s been a very long time since I’ve had to think about “proving” these so-called logarithmic laws or identities, but here are the operative ones you’ll need to remember. In the following notation, “log” is shorthand for the log of base \(e\) and exponentiation (often represented as something like \(e^{x}\)) is spelled out a little more as \(exp\) in juxtaposition to Leonhard Euler’s constant (\(e\)).

Here’s a basic proof of concept in R for some of these important identities. Let \(a\) be 45 and let \(b\) be 48. Pay careful attention to the quotient and product identities.

I do want to talk about one derivation of the quotient rule (i.e. \(log(a/b) = log(a) - log(b)\)). This is the percentage change approximation rule (of thumb) in which log differences are understood as percent changes. Here’s a quick formulation of this that is worth proving because it’s going to matter a great deal to how we deal with log-transformed dependent variables. Let there be two values, \(y'\) and \(y\), where \(y\) is observed at \(x\) and \(y'\) is observed at \((x + 1)\) (i.e. a one-unit change). This quotient rule in logarithms devolves accordingly.

In other words, our regression coefficient is our estimated of the difference between \(log(y')\) and \(log(y)\) (alternatively: \(log(y'/y\)). Let’s start with the quotient, which we know has a logarithmic identity. We can exponentiate that logarithmic identity and the following equivalencies come out.

The data I’ll be using for this post are a classic data set in pedagogical instruction. These are the Chatterjee and Price (1977) education expenditure data. In this classic case, Chatterjee and Price (1977) are trying to model projected per capita public school expenditures (edexppc) as a function of the the number of residents (per thousand) living in urban areas (urbanpop), the state-level income per capita (incpc), and the number of residents (per thousand) under 18 years of age.1 These data are relatively well-known for statistical instruction because they are an often cited case of heteroskedasticity.2 You could further teach the jackknife and the bootstrap around them with minimal effort. We will not bother with those issues here, though it’s worth reiterating that the interpretation of log-transformed regression parameters should come with a caveat about other aspects of model fit and OLS’ assumptions.

Let’s perform the analyses with the code below. Vincent Arel-Bundock’s {modelsummary} magic is happening underneath the hood to format the regression table.

Normally, this type of regression strategy would just minimally note that both scales (raw and log-transformed) of the under-18 population variable (and the DV) would result in a statistically significant coefficient that is positive. Or: “the (hypothesized, positive) effect of the under-18 population variable is robust to different variable specifications/transformations.” However, what they communicate as a coefficient is actually kind of different. Let’s start with the first case, and the simplest case.

Neither the IV or DV is Log-Transformed

This is the simplest case and I don’t want to belabor it too much because I’m assuming a rudimentary understanding of OLS regression. In this instance, the regression coefficient is communicating a basic takeaway: a one-unit change in the number of residents (per thousand) under 18 years of age coincides with an estimated change of about 1.552 in the projected per capita public school expenditures for 1975. This isn’t too difficult to understand; it’s the most ideal case. We can use basic model predictions to show just that.

We can summarize those model predictions we just gathered as well and compare them to the regression coefficient.

The DV is Log-Transformed, but the IV Isn’t

This changes a little bit when the dependent variable is log-transformed as practitioners sometimes like to do to impose normality on positive, (typically?) right-skewed variables. After all, skewed dependent variables are typically the culprit of some OLS model diagnostic problems (e.g. heteroskedasticity, non-normal residuals). It’s tempting—and I suppose, not completely dishonest—to say that a one-unit change in the under-18 population variable coincides with an estimated change of about .005 in the log-transformed value of the dependent variable. After all, R may or may not know that this dependent variable is a logarithmic transformation of something else. At least, if it knows, it doesn’t care. The practitioner has to know something else is happening in this so-called “log-lin” model.

Let’s illustrate what’s happening here in a stylized form. First, let’s create a simple prediction grid from this model where the income per capita and urban population variables are both fixed at their central tendency. I think data_grid() does the median by default. We’re going to set the under-18 population variable to be two values. The first is the median and the second is the median, + 1. Our simple data look like this.

A few interesting things are happening here. For one, recall that the dependent variable is log-transformed, meaning it has a special identity: the geometric mean. So yes, there is an arithmetic mean of the log-transformed variable but contained in this logarithmic transformation is another attribute, the geometric mean, from its exponential form. Second, the regression coefficient is something akin to a ratio because of this quotient rule and logarithmic transformations. Third, there’s another property lurking around here of interest to us: the percentage change approximation rule. With those in mind, here are the following ways you could unpack this quantity in relation to its untransformed (raw) scale, given some of the logarithmic identities introduced above. Our focus here is just on the under-18 population variable in order to maintain consistency throughout the post.

We can use a prediction grid to illustrate this. Here, let’s create a prediction grid with a sequence from the minimum to the maximum of the under-18 population variable, fixing the other regressors at a typical value. Then, we’ll create model predictions, based on the model with the logged dependent variable. We can exponentiate those model predictions and create a relative change variable communicating the relative change from its previous value (i.e. \(\frac{y'-y}{y}\)), and then multiplying that by 100 to get its percentage change. What emerges is consistent with what we did above, though we are relating the discussion back to our raw (untransformed) variable that we log-transformed for the regression.

The DV isn’t Log-Transformed, but the IV is

This is the so-called “lin-log” model and I see this less often than I see the so-called “log-lin” model. In our case, a rudimentary explanation of the under-18 population coefficient would say “a one-unit change in the logged value of the under-18 population variable coincides with an estimated change of about 503 in the estimated per capita education expenditures.” Or, words to that effect. This is already an odd thing to say because the transformation of the independent variable will juice up the absolute value of the coefficient (i.e. it reduces the scale of the variable in the model), which might artificially make the effect look “big.” In our particular case, there is no possible increase of 1 on the log scale for this variable. The logged minimum is about 5.66 and the logged maximum is about 5.96. A one-unit change doesn’t exist on the log scale here. Perhaps that is reason to not have log-transformed this variable in the first place, though the point of this exercises ignores that question altogether (i.e. I’m more interested in explaining how to interpret the OLS model in the presence of log transformations).

That said, something else is happening here. It’s a comparison of what the dependent variable is estimated to be under two hypotheticals. The first \(log(pop)\) and the second is \(log(pop) + 1\). Whatever that change comes out to is our regression coefficient (of about 503 in this case). However, we need to break this down into little pieces. To start, 1 in the context of a logarithmic variable can be understood as the log of Leonhard Eueler’s constant (\(e\)). Thus, \(log(x) + 1\) can also be restated as \(log(x) + log(e)\), which we have available to us because this variable was log-transformed before plugging it into the model.·That could further be restated as \(log(xe)\) given the logarithmic identities introduced above. Fundamentally, the regression coefficient is communicating a proportional change, saying what the dependent variable would look like if you were to multiply a value of the independent variable by Leonhard Euler’s constant.

There’s another way of looking at this, much like we did above with the percentage change of rule approximation. Comparing two values of the per capita education expenditures (\(y', y\)) for a one-unit change in the logged under-18 population value (\(x', x\)) can be written as \(y' - y = 503.206*(log(x') - log(x)) = 503.206*(\log(x'/x))\). Our percentage rule of thumb will reappear in how we can summarize this relationship, though this time it’s on the right-hand side of the formula. Here are the many ways you could summarize the “lin-log” model we estimated.

I see the fourth approach taught to students more often than the third. While I would not object to a student doing this, I think the third is more honest. Consider the code below as proof of concept. In this case, I’m starting a vector of 20 with the minimum of the under-18 population variable, leaving the next 19 spots blank. Then, I’m going to loop through the vector and create a new observation in the vector that is just the previous one, increased by 1%. This will encompass the effective range of the variable. Then, I’m going to create a prediction grid of its logarithm and get model predictions, summarizing the first differences of those predictions. While the \(\beta/100\) interpretation isn’t necessarily wrong for communicating the regression coefficient for a change of 1% (it’s an admitted approximation!), \(\beta*log(1.01)\) is the more accurate summary.

Both the DV and the IV are Log-Transformed

We can use an amalgam of the same code above (having already generated our 1% changes in the under-18 population variable) to illustrate what this looks like.