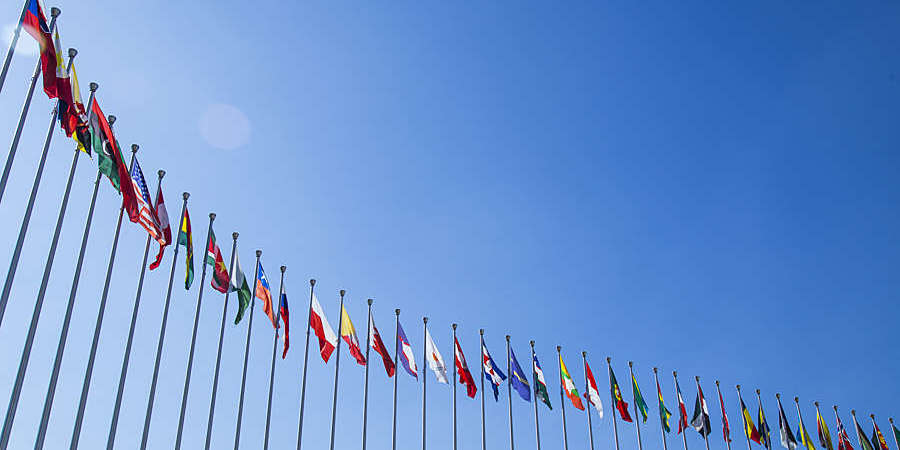 The particular student is pursuing a research program in international political economy. Substantively, much of what they want to do is outside my wheelhouse. However, I can offer some things to help the student with their research. The first lesson will be about various state (country) classification systems.

The Issue: There Are So Many Different Classification Systems!

It should not shock a graduate student in political science/policy analysis to learn that there is no universal standard for state classification. Indeed, various data sources and agencies will have varying definitions of what territorial unit counts as a state for classification purposes. Each data source/agency will also have a different coding scheme as well.

Take, for example, the following classification systems. The first, Correlates of War (CoW), leans on integers that range from 2 (the United States) to 990 (Samoa) to code states from 1816 to 2016. The second, the Gleditsch-Ward system, is a slight derivation of the CoW system. The overlap is substantial and the numerical range is effectively the same, but important distinctions emerge as Gleditsch-Ward interpret independent states differently. The third is two-character and three-character codes provided by the Organisation Internationale de Normalisation (ISO) 3166 Maintenance Agency, one that Americans will at least recognize as having tight integration with the American National Standards Institute as well as broad use elsewhere. The fourth is the United Nations’ M49 classification system. The fifth is the Geopolitical Entities, Names, and Codes (GENC) Standard (in both two-character and three-character form), which provides names and codes for U.S. recognized entities and subdivisions. GENC supplanted the Federal Information Processing Standard (FIPS) about 10 years ago for this purpose. To round things out, we’ll include the Eurostat classification system (which greatly resembles ISO’s two-character code), the FIPS codes (which also looks a lot like ISO’s two-character code), and the World Bank code (which is very similar to but slightly incompatible with ISO’s three-character code).

Here is how a few territorial units are coded, selected on whether their English country name starts with “T” and as these codes appear in the {countrycode} package.

It seems a bit daunting to see so many differences among these classification systems. With that in mind, I recommend a student (in particular, my student this semester) to do the following.

My student is interested in a cross-national analysis of a group of states—regionally or globally, I can’t yet tell—with respect to a host of financial indicators. The extent to which the analysis involves financial indicators means the temporal domain of the analysis is not going to be that long, all things considered. However, my student is going to want to make explicit the temporal domain first because that will have some implications for state classification.

Namely, a state may undergo a massive transformation at some point in the data. Consider an analysis that leans on the full domain of data made available by the World Bank. World Bank data (e.g. GDP) are generally available as early as 1960 and may, in some cases, go to a very recently concluded calendar year (e.g. 2019, since 2020 just ended). If that’s the full domain, the student will want to be mindful of some major events that have important implications for state classification.

I mention this only to note that if the temporal domain is something like 2000 to 2019, there won’t be too many issues (other than some slight interpretations of the split between Serbia and Montenegro around 2006). If you want the full enchilada of a temporal domain—the Correlates of War domain from 1816 to the present—there will be plenty of peculiarities/oddities in the classification system you choose that are worth knowing (the extent to which you’re going to be merging in data from multiple sources).

No matter, take inventory of the temporal domain you want first. State codes change over time. You’ll want to take stock of what headaches you can expect in your travels.

Make One Classification System a “Master”, and Don’t Use the Country Name

Vincent Arel-Bundock’s {countrycode} package—which I’ll discuss later—is going to be useful for getting different classification systems to integrate with each other. However, my student (and the reader) should be reticent to treat {countrycode} as magic or to use it uncritically. Namely, my student and the reader should treat one classification system as a “master” system for the particular project.

The system that the student/reader makes the “master” system is to their discretion. However, the master system should probably be the system that emerges as a center of gravity for the particular project. For example, I do a lot of research on inter-state conflict across time and space. The bulk of the data I use is in the CoW ecosystem. Naturally, CoW’s state system membership is ultimately my “master” system. It integrates perfectly with other components of the CoW data ecosystem (e.g. trade, material capabilities). One data source I integrate into these projects—the Polity regime type data—has a different classification system. When that arises, I standardize—as well as I can—the Polity system codes to the CoW codes and integrate into my data based on the matching CoW codes. Again, {countrycode} is wonderful for this purpose (more on that later), but it is not magic and there’s always going to be some cleanup issues to address in the process. But, it’s imperative on me, in my case, to treat the CoW system as a master system because it’s the center of gravity for what I’m doing. It makes my job ultimately easier.

A student doing a lot of cross-national financial analyses will probably lean on the ISO system as the master system. Namely, ISO classification is everywhere and prominently used in International Monetary Fund and World Bank data. I believe the Penn World Table also uses the ISO system for its data.

One caution, though. The student/reader should not treat the English country name as master system. A person who does this will be flagging discrepancies between a lot of countries/states, like “Bahamas, The”/”Bahamas”, “Brunei”/”Brunei Darussalam”, “Burma”/”Myanmar”, “Congo (Brazzaville)”/”Congo”/”Republic of Congo” and many, many more. To be fair, retaining country names in the data frame is going to be useful for diagnostic purposes, but it should not ever be the master system for classification.

Use a code, not a proper noun.

The remainder of this post will advise the student on how to use a few lines in R and some R packages to generate a panel of states (and states over time). First, here are the R packages we’ll be using.

I do want the student/reader to notice one thing I’m doing here. Namely, I have an underlying code and a country name alongside it as well. Don’t use the country name for classification purposes, but do use it for debugging purposes. A reader may get fluent in CoW codes or ISO codes, but, in the event of a matching issue, sometimes it’s good to see the full country name.

This comes pre-processed in my {peacesciencer} package. create_stateyears() defaults to returning CoW state system members for all available years from 1816 to the most recently concluded calendar year.

Create a Panel of ISO Codes

ISO codes are ubiquitous in economic data. I do have some misgivings about using {countrycode} to create a panel of countries, even for the ISO codes. Recall my concern that ISO codes are not very transparent about when (or even if) a code changes at particular point in time. No matter, the {ISOcodes} package has this information

Recall my earlier plea, though: pick one system as a “master” system, even among ISO codes. I’m partial to the three-character ISO codes so I’ll use that here.

{ISOcodes} does have another data frame for “retired” codes. This is ISO_3166_3 in the {ISOcodes} package. I encourage my student to take stock of how applicable some of these observations are for their particular analysis. My previous point about ISO codes—they don’t neatly communicate a temporal dimension—still holds.

If I understand these data correctly, the last change to ISO classification (that could pose a problem for merging from a CoW perspective) concerns the separation between Serbia and Montenegro in 2006. Taking this information to heart, let’s assume we wanted a state-year panel based off ISO codes for all ISO observations from 2010 to 2020. Toward that end, we’d do something like this.

{ISOcodes} also has UN M49 codes as well (UN_M.49_Countries) , though this requires some light cleaning.

Use {countrycode} for Matching/Merging Across Classification Systems

countrycode() is the primary function in Arel-Bundock’s package for that purpose. The user should create a column using the countrycode() function that identifies the source column (here: Alpha_3), identifies what type of classification that is (here: "iso3c"), and returns the equivalent code we want ("cown", for Correlates of War numeric code).

I do want the reader to observe something. countrycode() cannot perfectly match observations. The extent to which there are important differences among classification systems, perfect one-to-one matching is impossible (and it’s why I recommend treating one classification as a master system). When countrycode() cannot find a one-to-one match, it returns an NA and will tell you which inputs were not matched for your own diagnostic purposes. In our case, these are the NAs.

Some of this is by design. For example, there’s no CoW code for Aruba (ABW) because Aruba does not exist in the CoW system. That’ll be the bulk of the warnings returned by countrycode() for a case like this and you can safely ignore those. Some of this is, well, a headache you’ll need to fix yourself. For example, Serbia (SRB) always throws countrycode() for a loop, but Serbia has always been 345 in the CoW system. You can fix that yourself with an addendum to the mutate() wrapper. Something like ccode = ifelse(Alpha_3 == "SRB", 345, ccode) will work.

I use this to underscore that {countrycode} is one of the most useful R packages merging and matching across different state/country classification systems. However, it is not magic and should not be used uncritically. Always inspect the output.