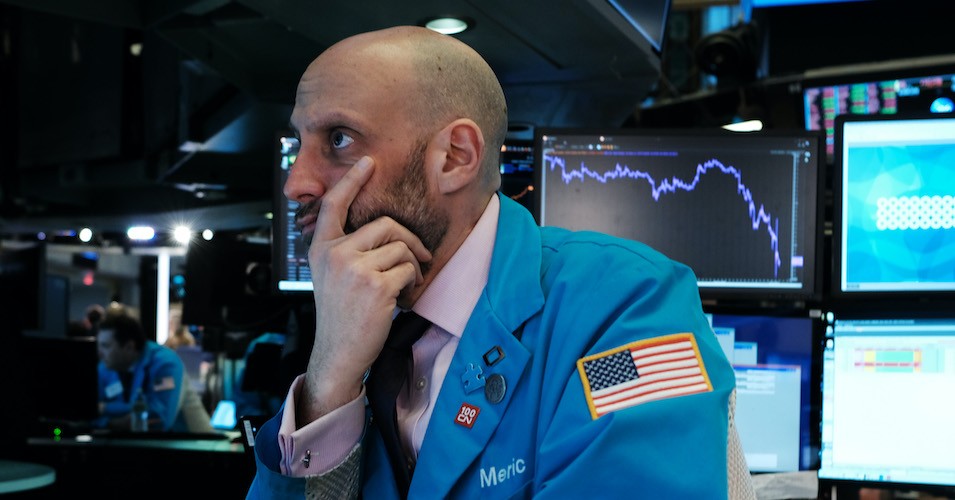 That feeling when you realize you're not going to retire until your 70s. (Photo: Spencer Platt/Getty Images)

That said, the Dow Jones’ day was clearly no good, and very bad. Here’s how you can contextualize that.

First, my stevemisc package has Dow Jones Industrial Average data dating all the way to 1885 in the data frame DJIA. I updated it not long ago to include the end of 2019. I haven’t added any 2020 observations to it yet, but that is easy to grab with the quantmod package. I also have presidential term data as part of the Presidents data set. Trump is not included in these data (because his term is still ongoing), but added him is simple in a tidyverse pipe.

One way of faithfully communicating Dow data—or any economic data, for that matter—is to index the data to some point. It’s why a lot of manufacturing data, for example, are indexed to 2010 or 2012 on FRED. Since the interest here is political (i.e. politicians like to take credit for good days on the Dow and deflect blame for bad days on the Dow), we can index the Dow trends within presidential administrations to the starting day of the presidency. Most indices start at 100, but we can have this start at 0 to more readily communicate growth and contraction in the Dow Jones Industrial Average within presidencies. 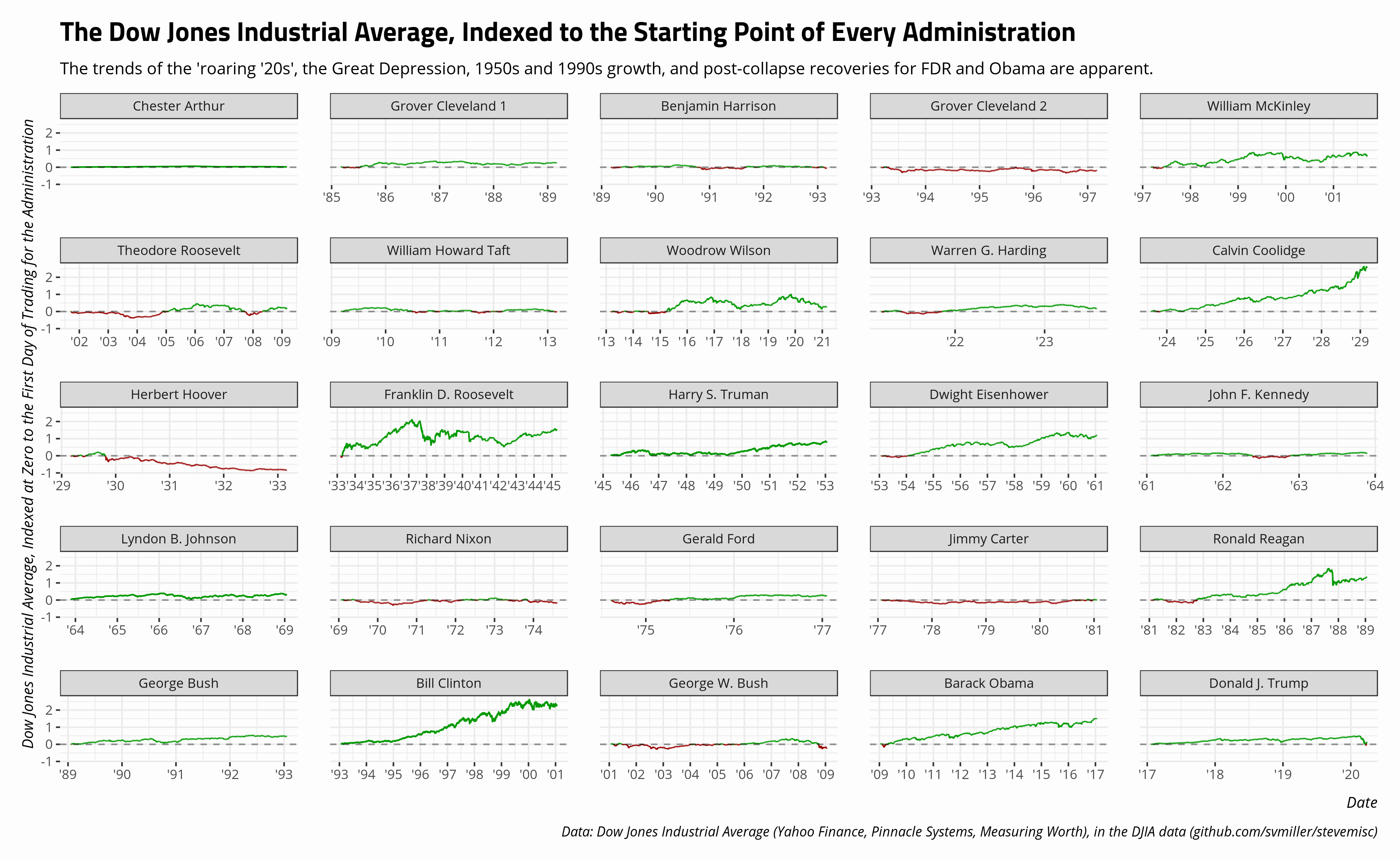 The data do well to show the scale of growth and contraction that defined these various presidencies. For example, we know the 1980s and 1990s were a period of high growth for the United States. This was made possible through a variety of factors, whether deregulation, technological change and innovation, and the Boomers entering their peak earning years. However, Ronald Reagan’s last day close was 2,235 (up from 951) and Bill Clinton’s last day close was 10,588 (up from 3,242). I’m old enough to remember the Dow crossing 10,000 for the first time being a big deal. However, those nominal numbers look paltry in modern times.

Calculating percentage changes in a time series is simple. Here, would be the 10 worst days in the Dow Jones’ history and the presidencies with which they concided.

There are not a whole lot of surprises. Ronald Reagan’s no-good-very-bad “Black Monday” crash was an all-timer and may not ever be topped. I forget the exact trading curbs initiated for the Dow Jones, but it’s likely trading would stop before that threshold is met in the future. Trump’s no-good-very-bad Thursday ranks fourth all-time and is surrounded by three Herbert Hoover observations at the core of the Great Depression.

For additional context, here’s every president’s worst trading day in Dow Jones history. Here, the data are ranked worst to best and the first appearance for all presidents is provided in this table.

One mild surprise here is Lyndon Johnson. Among all presidents through the history of the Dow Jones Industrial Average, Johnson had—for lack of better term—the “second-best worst” trading day in history. The worst trading day of his presidency came on October 3, 1966, a contraction of just over 2% from the previous day’s close. His presidency was turbulent in more than a few ways and it’s any wonder he didn’t have a worse day.

You could also extend this approach to look at the worst 30-day trading windows to further contextualize what’s happening now. All it takes is change the lagged variable (l1_djia) from 1 to 30 (i.e. l30_djia = lag(djia, 30). This would create a 30-day rolling window, within presidential administrations, to calculate the worst 30-day slides from time point t to time point t+30. Here, for example, are the 10 worst rolling windows over a 30-day period.

You can also drive the point home about how precarious our current situation is by flipping one line of script in the above R code that calculates the worst individual trading days in Dow Jones history. See the above code that reads? arrange(percchange)? Replace it with arrange(-percchange) to get the best individual days in Dow history. Here, we’ll select the top 20.

It’s worth saying growth in trading is ideally supposed to be incremental over the long-run. Huge volatility in trading runs both ways, never seeming to coincide with something good on the balance.

You can also use these data to assess just how confident we should be in magnitude gains from Monday to Friday. For example, multiple outlets are claiming that this week is the best week for trading since 1938, notwithstanding the loss on Friday. Consider this summary from Barrons:

Here’s how you can assess that claim with some context (check the file in the _source directory for full code).

A recurring trend in these posts is that I’m skeptical that many of the boastful claims about the performance of the Dow Jones industrial average of late amount to wishful thinking absent any type of context of the other times the Dow Jones had great days or great weeks. It’s akin to Homer Simpson chasing his roast pig. “It’s still good! It’s still good!” Buddy, it might be gone.