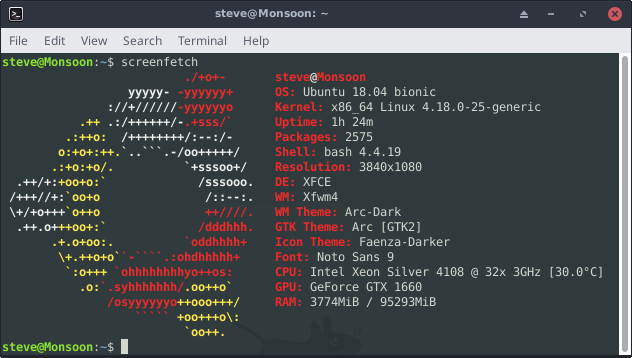 I’ve been a dedicated Linux user since 2005 and made the final switch from Stata to R for statistical analyses in 2012. There are always some configuration issues involved in getting a setup with which I’m comfortable, but I ultimately find it. However, this becomes a bit of a headache when I get a new computer and have to figure out how exactly I did what I did.

Consider this mostly a note to myself on tailoring a Linux installation (preferred: Ubuntu and its derivatives like Linux Mint) to my preferred workflow. Others may find it useful but this is mostly for an audience of one (i.e. me) so that I can remember what I did the next time I have to install a brand new Linux distribution.

Install These Packages Before Installing R

Linux users, unlike Mac or Windows users, will need to install some other packages from the package repository in (Ubuntu) Linux before several R packages will work. Basically, make sure to install these packages in the command line before trying to do anything in R.

You’ll need curl for R Open, which I used to use before version 4.0 of R. libssl-dev and libxml2-dev are required for the {openssl} and {xml2} packages in R, which are required packages for {tidyverse}. libcurl4-openssl-dev is required for {RCurl}, which {brms} requires for statistical modeling in Stan. You’ll need need libgit2-dev for the {git2r} package in R, the extent to which {git2r} is required for the devtools package. {nloptr} depends on cmake. {kableExtra} requires {systemfonts}, which in turn requires libfontconfig1-dev on Ubuntu. {pkgdown} has a similar intermediate requirement. It requires {textshaping}, which in turn requires libharfbuzz-dev and libfribidi-dev. It also requires {ragg}, which needs libfreetype6-dev, libpng-dev, libtiff5-dev, and libjpeg-dev. Thinking ahead, you’ll need libssl for installing Rstudio as well.

Install these packages before installing R or trying to install your favorite packages in R and you’ll ensure there are no package installation problems. I will probably revisit this and update it when I find another Linux package required for another R package.

Getting Stan to Run on Ubuntu With Your Makevars File

I forget why this keeps happening but a Stan model won’t compile in R out the box. There will be an error that reads something like “C++14 standard requested but CXX14 is not defined”, but the fix requires just one line of code. Create a blank document and copy-paste the following into it.

Save that file as Makevars and drop it into a .R folder in the home directory. Restart R/Rstudio if necessary but that should do it.

This change will appear when you call R in the terminal. However, Rstudio will still want to point to Microsoft R Open. To get Rstudio to point to vanilla R, add the following line to the .profile file (again in the home directory).

Logging out and logging back in should be sufficient to finalize these changes. Undoing these is as simple as commenting out those lines in the respective files and logging out/in again.

Clemson University bought me a new laptop (Lenovo Thinkpad P52s) this summer. It was one of those situations where the university stipulated 1) I must get a new laptop because the money is allocated for this and no other purpose even if it is not a purchase I wanted or expected (kind of like this situation) and 2) it must not cost more than $2,000. I’m normally a Macbook user, so this priced me out of a Macbook Pro. Truth is, though, I’m not sure I even wanted another Macbook anyway because the newer models look completely unappealing for the price tag. So, after our college’s IT guy had a falling out trying to communicate with Dell, I got a new Lenovo Thinkpad P52s.

Unrelated to that aside, Mac’s Finder (i.e. its file manager application) defaults to putting underscore directories first before a case-insensitive alphanumeric sort. I like that default a lot. Jekyll users will recognize that underscored directories coincide with important directories that contain site content. I’ve started to extend that logic to my R projects, creating directories for _cache (code chunks) and _figs (document figures) that I keep elevated in a list view in my file manager. However, that option is nowhere a default in the various system locales on Linux. LC_COLLATE=C will list underscored directories first before directories that start with a number or letter, but it is a case-sensitive setting that elevates uppercase directories above lowercase directories. That might work for some people, but it would make my sprawling Dropbox directory unnavigable.

The good news is there’s a simple way to do this that leans on the default (American) locale of en_US.utf8. It requires a few sudo commands and edits in a text editor.

Thereafter, open iso14651_t1_common_edited and scroll down a bit until you see this line:

Change that to this:

The last set of steps will involve getting your Linux setup to recognize this new (modified) locale. Open /etc/locale.gen in a text editor with a sudo command and add a line that reads en_US_edited.UTF-8 UTF-8 somewhere as a new line. Save that and run the following commands to finalize what you did.

Finally, reboot the system (not just logout) for the changes to take effect.