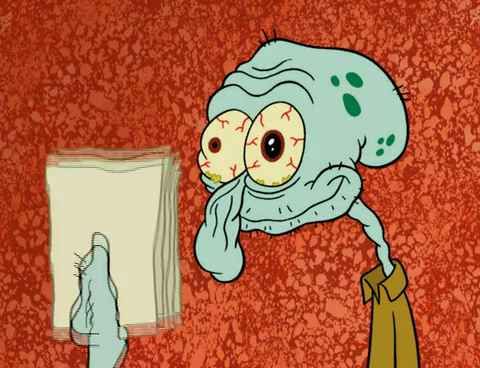 It's remarkable how much Squidward appears in a Google Images search for writing term papers during an all-nighter.

I take great pride in teaching a quantitative methods class that emphasizes work toward an end-of-the-semester research design paper. I’ve been genuinely surprised at the results that some students put forward. This class has also produced a couple research assistants for me and students who have begun graduate school or will be sure to start graduate programs soon (i.e. once they graduate).

The research design paper that I get is, from my experience, a reliable metric about who has considerable promise as a political science student. Those who excel at it have considerable promise for the next phase of their career. Those that do not stand out from the pack on this project are indistinguishable from their peers with nothing negative implied. At the least, the research design papers are okay on average.

This semester was a bit different. Several errors either appeared or were ubiquitous that I had not seen in my 8.5 years of teaching college students. What follows is a warning for future students both in my class and, ideally, students taking any political science class that builds toward an end-of-the-semester research paper. Students may find a previous blog post on “dos and don’ts of writing” and how to do a literature review to be useful. For the sake of my methods class, students should also read my research design paper instructions.

Get to the Point and Stay on Point (Seriously)

Most of my comments on student papers concern the length of time it takes for a student to say anything. These comments take the form of “A to B in as few words as possible” or “where is this going…”. The latter indicates much more frustration than the former. By time that comment appears, I may have already made my mind about what grade the student is getting for a particular section of the paper. Typically, that’s not good.

My hunch is students take forever to get to the point they think they are arguing because they are worried about not meeting a page length requirement or the minimum word count. Students mistake that the biggest sin in a research paper in a college class is not meeting those minimum length requirements. That’s not true. The biggest sin is leading the reader on a path to nowhere.

I believe there’s an obvious solution to this issue, though it requires taking to heart lessons students learned (or should have learned) in writing papers at lower levels of education. Outline each proposed paragraph in each section. For example, the literature review of any research paper should be about eight paragraphs in length.1 Make an outline with six-to-eight bullet points. The student that starts with just six bullet points can expand one of them to an additional paragraph later. For each bullet point, write a clear and concise statement that corresponds with an important lesson gathered from the review of the literature.

I’ll illustrate this with a condensed version of my literature review in my forthcoming Conflict Management and Peace Science article. For sake of clarity, I omit some parenthetical citations for these claims in order to better illustrate what this process should resemble.

From this, I can expand and generalize these claims to a full-bodied literature review. Students can—really: must—do this with their theories as well. All told, it makes for much better structure in a particular section of the research paper.

Further, it should allow the student to stay on track when writing a particular section of the paper. Too many papers derail early in a given section when the student is chasing the elusive minimum word count or page length.

A (Simple!) Thesis Statement for Each Paragraph

I hope the prospective student noticed in my example above that each item in the list amounted to a thesis statement that guided each paragraph I wrote for that literature review. This frames the entire paragraph to follow. I do not stray off-topic.

The prospective student should also notice that these sentences are simple, direct, and to the point. The student should not waste time in saying what s/he needs to say.

There are two important drawbacks from making (what amount to be) thesis statements into these complex, qualifier-laden chores to read. One, it buries the proverbial lede. It confuses the reader about what point needs to be communicated. Two, it takes important “bite” from the statement that should be catching the reader’s eye. Simple sentences are always more jarring and noticeable.

Let me illustrate this with a reworked example from a paper I graded. All typos and spelling-grammatical errors are “as is”.

Yuck. A better way to state this argument follows:

This reworked example uses a much simpler sentence structure to more plainly communicate the overall point of the paper to follow.

However, I caution that thesis statements, especially about the overall argument in the paper, should be even simpler than that. Given this author identified two conditions under which s/he purports multilateral sanctions would be more effective than unilateral sanctions, it might even be better to state this argument as follows:

The third example is a happy medium between the two, should the student place more urgency on the minimum word count/page length.

The “quote-dump” is one of the worst, most commonly appearing elements to any student paper and it needs to stop post haste.

By “quote-dump”, I refer to the practice of taking a verbatim passage from a given text (sometimes a full sentence and routinely more than that), inserting it as a direct quote into a paragraph, and offering the minimal parenthetical citation to avoid accusations of plagiarism. Turnitin will flag this practice as “unoriginal”, and it is. It’s not plagiarism, but it sure as heck is not original.

Professors encourage citing relevant sources used in the course of writing a research paper. However, failure to take time to translate what the cited sources are saying into the student’s own words amounts to something that is spiritually similar to plagiarism. The “quote-dump” will not result in an academic misconduct hearing, but both the “quote-dump” and plagiarism may result in identically poor grades for the assignment.

Here’s a guide for students who are asking themselves whether they should directly quote a source verbatim in their paper (i.e. “quote-dump”).