steveproj is an R package to help you start and manage R projects with an eye toward producing an academic project (to culminate in an academic paper). The package is in development and will incorporate other packages in my eponymous R ecosystem, prominently {stevetemplates}. The package itself leans primarily on Rstudio and how it creates/manages projects. The creation a project in Rstudio, through steveproj, will result in a new directory containing subdirectories for rendering documents (src/), R scripts for analysis (R/), finished data objects (data/), and finished reports (doc/). An accompanying Makefile and R Markdown file will assist in the management and production of the project.

What It Does (So Far)

Assuming the latest/development version of {stevetemplates} (i.e. the one that has the Word template) and considering any potential LaTeX weirdness that comes from different builds, this package has function in R and Make that will:

When the time comes, you can install this on CRAN. Any version of this package on CRAN should be understood as a “stable” release that may lag behind the “development” versions available on Github. However, releases on CRAN should come with more confidence about quality control.

A developmental version version of steveproj is available on Github and you can install it via the devtools package. I suppose using the remotes package would work as well.

The functions in this package work as intended in an R console, but this package realizes its full potential and its core functions are fully augmented through three additional pieces of software the user should already have installed. The first is Rstudio. Most dedicated R users are likely fully aware of Rstudio as an integrated desktop environment (IDE) and already have it installed and pre-configured to what they think is ideal for their workflow. I will only add that I think it advantageous for the sake of this package to adjust the pane layout such that the “source” pane is top left, the “console” pane is top right, the “environment” pane is bottom left, and the “files” pane is bottom right.

The second piece of software is LaTeX. LaTeX is a prominent document preparation system in academia and preferred by publishers especially for its contrast to “What You See Is What You Get” word processors like Microsoft Word. steveproj ultimately places R Markdown and Pandoc—which are necessary for this package—before LaTeX in terms of document preparation. No matter, steveproj necessarily elevates LaTeX PDF documents above other output types.

There are two options for installing LaTeX on your system. First, you can install it yourself—in all its 4+ gigabytes of glory. For Mac users, this is “MacTeX” and you can install it here. For Windows users, this is “MikTeX” and you can install it here. For (Ubuntu) Linux users, something like sudo apt-get install texlive-base texlive-latex-base texlive-latex-extra should work. Linux users are probably aware that whatever version of LaTeX comes default in their package manager of choice comes with multiple, complementary packages. Installing even texlive-base will probably install more of them as dependencies.

The second option is tailored for those interested users with no awareness of LaTeX. steveproj imports rmarkdown, which in turn imports tinytex. This would be an R package to install and maintain a version of LaTeX to compile these documents that ostensibly precludes the need to download the more comprehensive suites available on the internet as proper LaTeX distributions for different operating systems. Once tinytex is installed as an R package, this simple function will install a working version of LaTeX.

I will only add that users who do this should know the preferred flavor of LaTeX template (from {stevetemplates}) in this package requires one additional LaTeX dependency that tinytex does not install by default. You may encounter a vague error in rendering to PDF that reads something like this.

If you encounter this error, run the following command in your R console.

This should fix it. I thank Ian Adams for bringing this to my attention (and Cornelius Hennch for proposing a solution).

The third piece of software the user should install is Make. Make is a build automation tool built around a “Makefile”, which contains a set of recipes that have various targets and dependencies. For each target, if the specified dependency is “newer” than the target (or if the target does not yet exist), the Makefile executes a command. Users will get a reproducible example of how this works, and they can learn by example from it, but it assumes the user already has it installed.

Installation of Make prior to installation of steveproj is not necessary; in fact, it’s not even strictly necessary to have Make installed at all. It is, however, strongly encouraged. Linux users and Mac users should, in theory, have Make installed on their operating systems already (i.e. because both are UNIX-derivative and Make is a GNU program). Opening a terminal and entering the following command should confirm that.

If the console output instead suggests Make is not installed, the user may want to search for how they can install it (given their particular flavor of Mac or Linux). For Mac users, most paths would lead to installing or updating Xcode from the App Store though the popular Homebrew package manager should also do this. Linux users in the Debian family (prominently: Ubuntu) who, for some reason, don’t already have this installed can install it via sudo apt-get install build-essential or sudo apt-get -y install make in a console. Linux users in the Red Hat family (prominently: Fedora) should be able to install it by way of sudo yum install yum-utils or dnf install @development-tools. However, it seems impossible that these would not already be installed on most Linux distributions these days (and for Mac as well). It is one of the oldest and still most widely used GNU programs. No matter, make -v should confirm its presence after one of these installation paths.

Windows users will invariably have to install it since it will not come by default. The Carpentries has a guide and installer to do this. Windows users may also want to consider installing Chocolately, an apparent Homebrew analog for Windows users. Afterward, a simple choco install make command should work just fine. The increased integration of Linux into Windows, prominently Windows Subsystem for Linux, offers more avenues for Windows users to install Make on their operating system. I thank Dave Braze for alerting me to another option. Windows users can install and configure make through installing {RTools}. Afterwards, the user can add a fully qualified path to their PATH environment. You can read more about this process here.

My website will have a more exhaustive tutorial for using this package and all that comes in it. For now, a user maximize their experience with steveproj through either the console or Rstudio.

Assume the current working directory is something like /home/steve/Dropbox/projects (as it is for me). Then, a user can create a new project with the create_project() command.

This will create a new directory in the working directory, titled “dissertation”, that includes a skeleton of a research project to assist the user in getting started on their academic paper/project. That directory will be located in the current working directory. The only downside to the console approach over the Rstudio approach is the console approach won’t create an .Rproj file in the directory. The Rstudio approach will do this. The choice is yours whether you want this, but .Rproj files are wonderful for keeping environments insular in Rstudio.

You could optionally combine this command line call in the console with the following command, which will add an .Rproj file to the directory you just created.

Go to File > New Project. You’ll see a prompt that looks like this. Select “New Directory”. 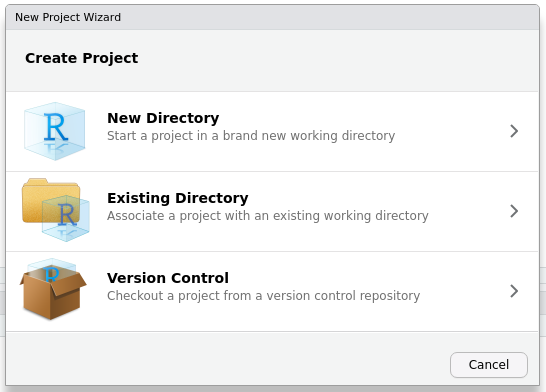 That will direct you here. Scroll down your available project types until you see my “S” icon, which is incidentally the favicon on my website. Select that entry to create a new academic paper/project. 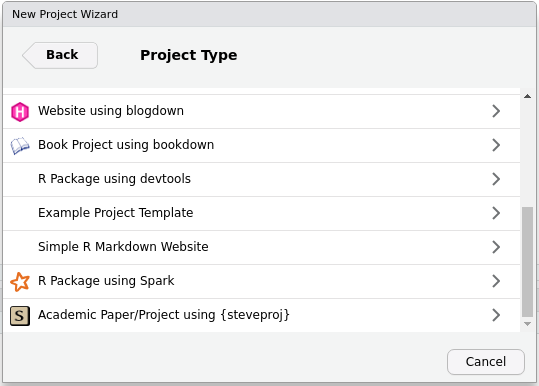 That will direct you here. Enter the name of the directory you want to create. Click “Create Project” when you’re done. This will create a new directory, titled whatever you entered in the directory name, along with an .Rproj file. By default, it will also open a new Rstudio session. 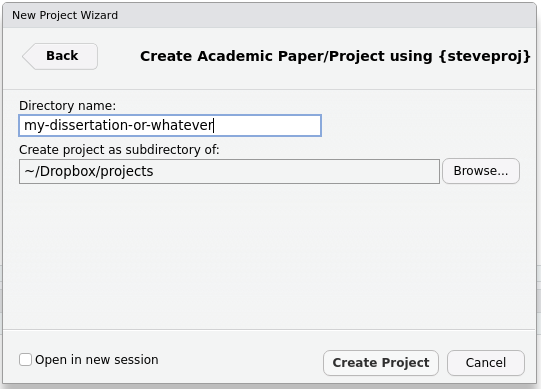 An Illustration of Automated Workflow in {steveproj}

The March 15, 2021 post on my blog talks more about the design here. Obviously, the skeleton project created in steveproj is full of gibberish text and an analysis that is likely uninteresting to the user. No matter, the skeleton project points to the possibilities of steveproj and suggests a template to copy for your own workflow.

The Makefile and ms.Rmd files are executable as they are (assuming, obviously, that you installed Make). In Rstudio, switch from the console tab to the terminal tab. Therein, enter the following command (provided the working directory in the terminal is the same as the location of Makefile).

If the user is interested in generating a .bib file for their citations, they can execute the following command.

This will farm the ms.Rmd file for citations and format that as a refs.bib file in the inst/ directory.