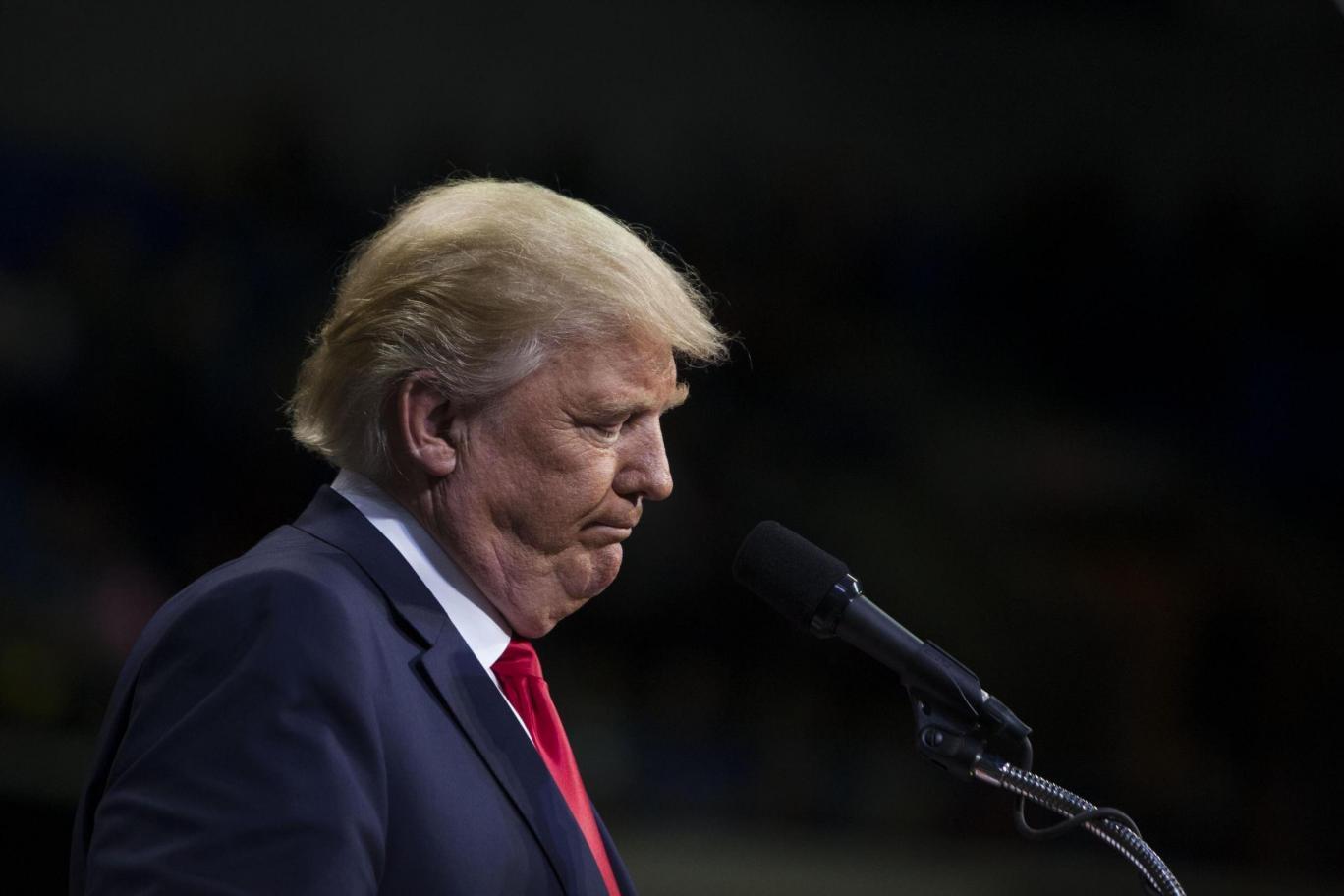 The President-elect reportedly finds this picture of himself flattering and thinks of it as a personal favorite photo, so I intend to use it.

Donald Trump, President-elect of the United States, has gone on some Twitter rants lately. All have touched on controversial topics like flag-burning and the exact scope of presidential authority in an era in which Americans wrestle with how much liberty is acceptable to trade for the cause of security.

Political scientists, I should note, are not idiots. In fact, our discipline is rather astute at anticipating why someone like Donald Trump, who will enter office with historic unfavorability ratings, goes on these Twitter rants. They’re diversions for Trump. His tweets will dominate a news cycle in lieu of some other topic that Trump would rather not discuss. These days, that’s almost entirely about his unprecedented conflicts of interest. Trump is almost advertising a kleptocratic form of government in which he will run the United States as if it were a Central Asian republic like Kazakhstan. This is less editorializing and more a statement of fact at this point. Ask your local Congressperson whether victory in a presidential election permits the incoming president to trample the constitutional charter of the United States. For that matter, ask your Senator about Trump’s unsavory Cabinet picks and presidential staff selections too.

The Twitter rants have increased in intensity lately amid news items that Trump would rather bury below the proverbial fold. Here’s a recent one that came from the blue about flag-burning, a controversial topic that received zero political attention lately until Trump mentioned it.

Nobody should be allowed to burn the American flag - if they do, there must be consequences - perhaps loss of citizenship or year in jail!

The problems with this proposition are enormous, almost infinite. Flag-burning is constitutionally-protected free speech via two Supreme Court decisions in 1989 and 1990. Texas v. Johnson in 1989 overturned flag-burning laws in 48 states while a follow-up decision in 1990, United States v. Eichman, overturned the federal Flag Protection Act. Conservative hero Antonin Scalia, controversial as he was on other topics, voted in the majority in both cases. Further, Afroyim v. Rusk in 1967 ruled the U.S. government cannot strip citizenship rights from natural-born or naturalized U.S. citizens.

It’s bad enough as a Twitter rant until you realize this comes from the incoming President of the United States. At which point, this Twitter rant becomes terrifying.

However, Trump is not the only terrifying component of this topic. It might be even scarier that most Americans agree with him.

On the contrary: He is tapping into a real and strongly-held sentiment that does not break down perfectly along party lines. In 2006, half of Democrats were in favor of a constitutional amendment that would have permitted Congress to legislate in this area (69 percent of Republicans agreed). In both Texas v. Johnson and United States v Eichman, the Court split in peculiar ways, with Scalia and Marshall in the majority and Stevens, O’Connor, and Rehnquist dissenting. As a political question, this ain’t tax reform.

This is a general theme about Donald Trump’s discretionary outbursts on controversial topics. You’ll struggle to find cases in which Donald Trump isn’t on the same side of public opinion. 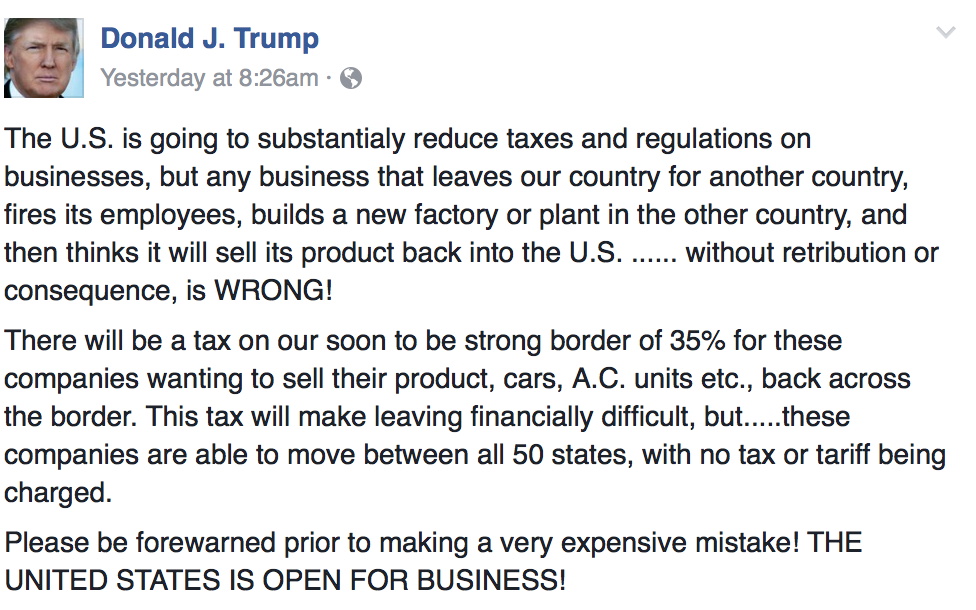 Consider his latest social media outburst about outsourcing jobs to other countries. This follows his controversial decision to negotiate with Carrier about its plans to relocate its furnace-production facility to Mexico (which it still will) at the expense of the manufacturing jobs in Indiana (which are still leaving the state/country). It also coincides with Mike Pence’s controversial statement about Trump using presidential authority to intervene on these matters on a case-by-case basis.

Ignore for the moment everything that is wrong with the logic underpinning Trump’s statement and that he would almost assuredly receive no higher than a D on a curve in any intro to international relations or political economy class. The problem here isn’t that Trump said it as much as public opinion is on his side. A 2010 poll found that 86% of Americans agreed (and 68% strongly agreed) that outsourcing jobs to other countries is a major reason for why the economy struggles and unemployment is high.

Also ignore that automation is far more responsible for lost manufacturing jobs than outsourcing, though repeat it until you’re blue in the mouth because it’s true and eventually people will learn that. Focus instead on the implications of what Americans want, or at least say they want. Americans who don’t see (or don’t fully appreciate) the benefits of globalization are asking for the kind of tariffs, incongruent with the World Treaty Organization, that Trump seems to propose here.

Consider this question from the 2012 round of the American National Election Survey (2012) with the following prompt:

This is a rather provocative question gauging protectionist sentiment that stands at odds with everything we’ve done after World War II for the cause of global peace and economic prosperity. No matter how much someone in my field might object this proposal of import limits is preposterous, 66% of respondents favored them. It’s a super-majoritarian proposition, at least when you couch the issue like this. 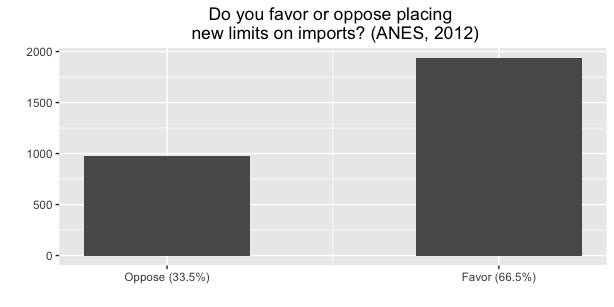 Histogram of support for import limits in ANES (2012) data

We can cynically retort that we’ll see how long that holds when your typical American can’t buy an iPhone and ultimately realizes a tariff is a regressive consumption tax that they’ll pay when they shop at Walmart, but the signal Trump sends resonates well with public opinion here. 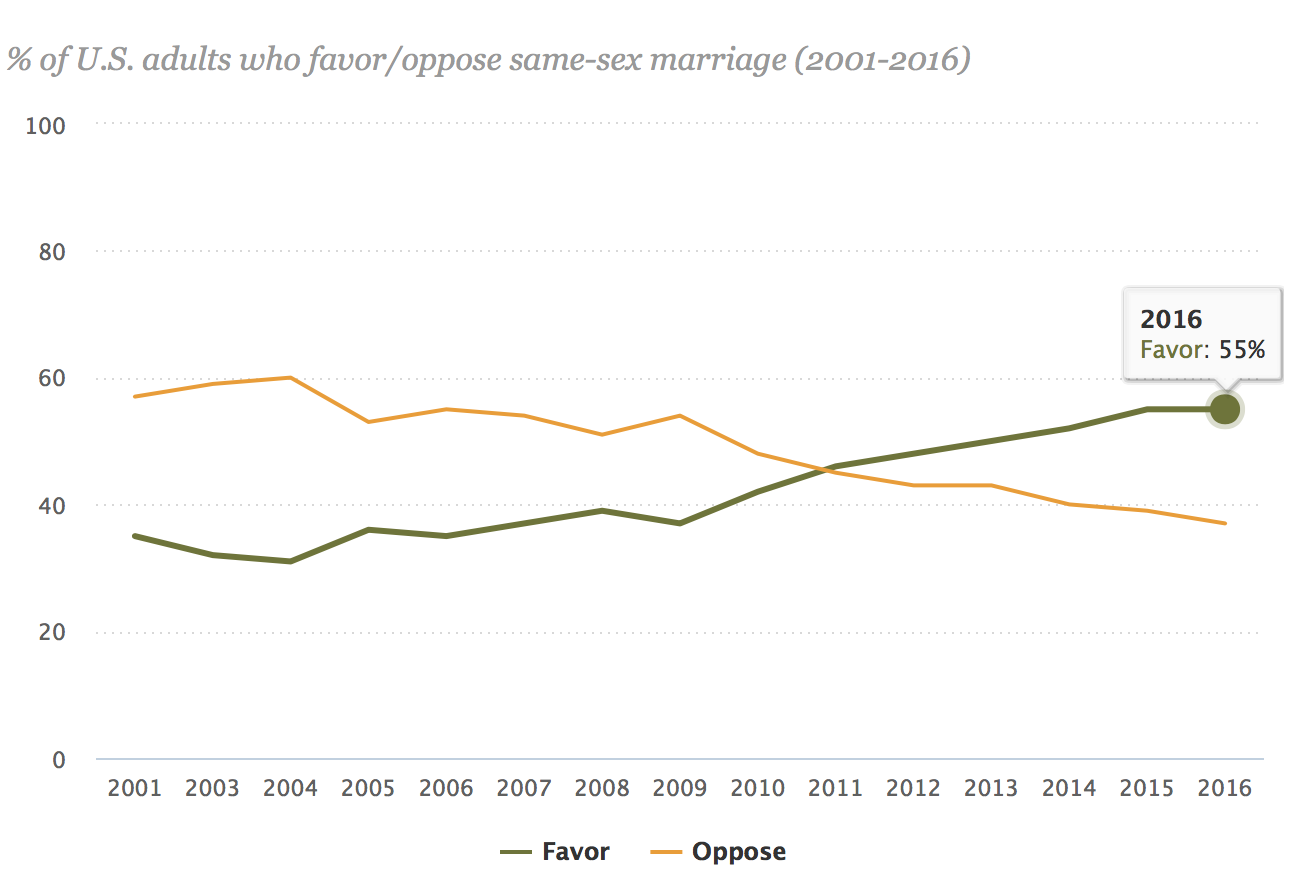 The Trump policy position that oddly intrigues me the most is about abortion. Did you watch the 60 Minutes interview in which Trump said same-sex marriage is a “settled” issue (despite Obergefell v. Hodges being only a year-old) while the outcome of Roe v. Wade, a 43-year-old court case, can “still be changed?” Trump picking abortion to politicize, as he did when he said a woman should receive “some form of punishment” for getting an abortion if it were illegal, follows this same pattern. So why does it make sense for Trump to politicize a 43-year-old Supreme Court decision and not a year-old Supreme Court decision that is much more “fresh?”

The answer here is simple. Same-sex marriage is a majoritarian position; abortion is not.

I present attitudes over 40-some-odd-years of General Social Survey (GSS) data on abortion attitudes after this paragraph. GSS is unique for asking a battery of questions about conditions when a woman should be allowed to obtain an abortion. These conditions for a possible abortion include 1) for any reason whatsoever, 2) the woman is married, but wants no more children, 3) the woman is poor and can’t afford another child, 4) the woman is “single” (i.e. not married) and doesn’t want to marry the man who impregnated her, 5) the woman’s health is seriously endangered, 6) the woman is pregnant as result of a rape, and 7) there is a possible defect in a child. The results follow. 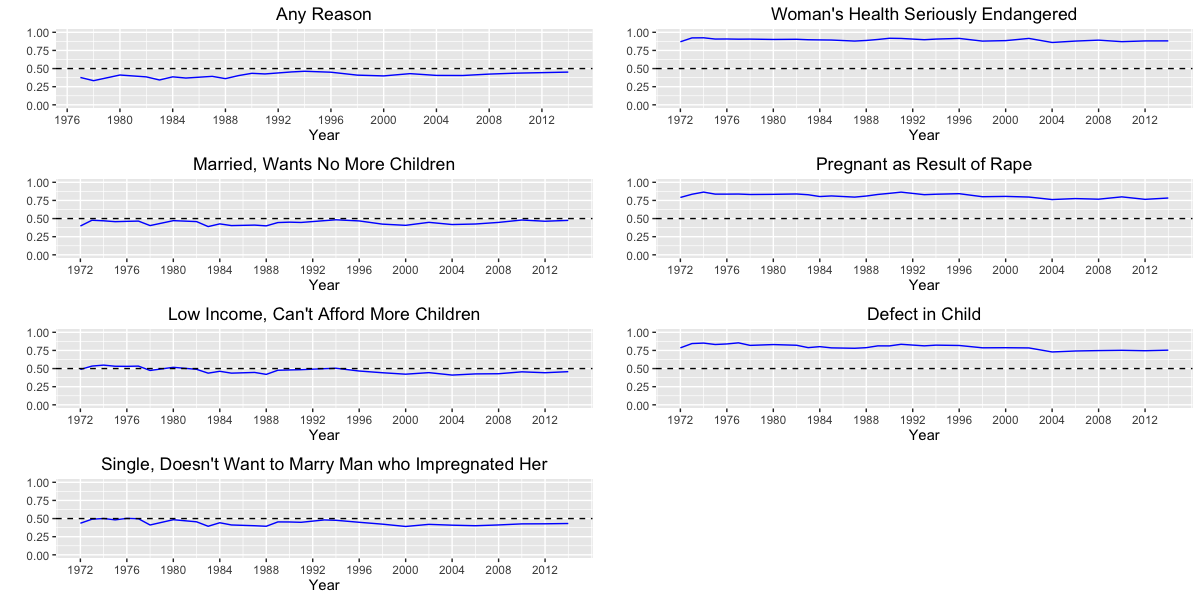 I should note Americans are generally more receptive to a woman obtaining an abortion if you attach, como se dice, “health-related” qualifiers on her situation. Americans think abortion is okay if the woman was sexually assaulted, if there’s a serious health defect in the child, or if carrying the fetus to term would pose health risks for the mother. Americans, in the aggregate, reject an abortion for any other reason. I contend the “any reason whatsoever” question might be the most informative metric here for tracking support for abortion. It’s the rawest, most blunt way of gauging support for abortion as pro-choice advocates typically like to frame it: something that “doesn’t involve you so why should you care?” Absent a strong, “health-related” qualifier, the answer has been “no” on abortion ever since GSS started tracking abortion as an issue after Roe v. Wade. Put another way, it’s remarkably easy to politicize abortion since its acceptance is not a majoritian position. If you were to put it to a simple up-down vote, Americans would likely repeal Roe v. Wade and outlaw abortion.

Let this be a chilling conclusion to Trump’s social media outbursts on controversial topics like flag-burning, discretionary presidential intervention in private businesses, and woman’s reproductive health issues. No matter how controversial his stances are, Trump is typically on the same side of public opinion. This kind of squares with some of the implications of my research, especially stuff forthcoming in Conflict Management and Peace Science and Political Behavior. This manuscript R-and-R-ed at a major journal is useful too. Be careful for what you collectively ask. While I don’t discount Zaller’s model of mass public opinion (though I think his model struggles to explain some of these findings, especially about protectionism), there are routinely situations in which politicians respond to us and what we say we want. We take these instances for granted. We saw this after 9/11 (see: Huddy et al., 2002; Hetherington and Suhay, 2011). We might see it again. Americans who are concerned about a president proposing to do stupid and retrograde things should stop collectively asking for stupid and retrograde things.